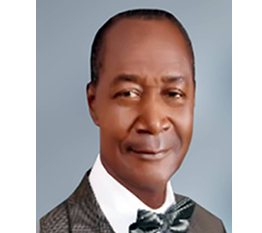 “Engineer Joseph Oyeyani Makoju, OON, OFR, is a Chartered Engineer and a Fellow of the Nigerian Society of Engineers (FNSE), Nigerian Institute of Management (FNIM) and the Nigerian Academy of Engineering. He is a member of the British Institute of Mechanical Engineers, Nigerian Institute of Management and of the prestigious National Institute for Policy and Strategic Studies (mni). He holds a First Class BSc and an MPhil in Mechanical Engineering from the University of Nottingham, U.K. He was born on 13th July 1948. He was also the Special Adviser to the President/Chief Executive, Dangote Group. Makoju recently retired as the Group Managing Director/ CEO of the Dangote Cement Plc, a position he has held since April 2018. Prior to that, he was the Managing Director/Chief Executive Officer of the erstwhile National Electric Power Authority (NEPA)/Power Holding Company of Nigeria (PHCN), Nigeria's national electricity utility. He was selected and invited for this job by the government on the basis of his track record in the private sector: for almost a decade, he was the Managing Director/Chief Executive Officer of the West African Portland Cement Company, at that time Nigeria's largest cement manufacturing company. After his tenure as the Managing Director/Chief Executive of NEPA, Makoju was appointed consecutively as Special Adviser to three presidents of Nigeria between 2007 and 2011. He served as Special Adviser (Electric Power) to President Goodluck Jonathan of Nigeria under two separate administrations. He was the Chairman of Cement Manufacturers’ Association of Nigeria (CMAN) -1992–2000, and current Chairman-2008 till date. He was the Vice-President of Nigeria Employers’ Consultative Association (NECA) (1998–2000). Between May 1994 and May 1999, he was the President of the Chemical and Non-Metallic Employers’ Federation (CANMPEF), the largest employers’ federation in the manufacturing sector. Makoju is a National Council member of the Manufacturers’ Association of Nigeria. He is also a member of the National Economic Revival Council, a think-tank for advising government on economic policy and member of the African Regional Board of the London School of Economics. He was also the pioneer Pro-Chancellor of the Federal University of Petroleum, Effurum, Delta State. Engr. Makoju’s accolades extend beyond the shores of Nigeria, as he holds the distinguished title of the Grand Commander of the Special Order of Merit of Niger Republic”